I realize I haven’t posted in a while.  I do have many more topics I’d like to cover, but I’ve been quite busy with the holidays and a computer that went to silicon heaven.

One thought I have had recently is the gas station attendant.   Let me explain:

One of the key dynamics in my relationship with narcissists is that I gave them the power to abuse me.  If I didn’t give them that power, they wouldn’t be able to abuse me.  Sure they could still make attempts to discount, devalue, project, triangulate, etc, but if I just laugh it all off, they have no power over me.  When I take what they say to heart and actually let it affect me, then I am giving them power to dictate how I should live my life, and I am assuming a role that they desperately desire me to fulfill.  Once I stop giving them that power, their attempts at control seem like the juvenile antics that they truly are.  Furthermore, if I laugh at their attempts to control me, they will very quickly become frustrated and will leave me because I have shown them that I am not a reliable source of Narcissistic Supply (NS).

This is where the gas station attendant comes into play.  If my narcissist told me that I was “useless” and “no one would put up with you”, would *I* let their comments hurt me?  Would I let those poisonous arrows from my parent, significant other or child find their mark?  Now if the gas station attendant told me that I was “useless” etc, how would I feel?  Would I immediately become defensive?  Would I take what they said to heart and walk out to my car feeling dejected and useless?  Hardly.  I would most likely laugh at them or roll my eyes at them and walk out to my car without ever giving it another thought.  The gas station attendant has no power over me, because I haven’t given them that power.  Their attempts at control are futile because I don’t let them have control.   The only way I can be controlled is if I permit someone to control me.  This is true for all my relationships, be they with the gas station attendant or my narcissistic mother.

I have several examples of this type of behavior from my last relationship with my cheating ex-girlfriend.   One example was during the worst fight we ever had, which occurred about 4 months before her cheating incident when I ended our relationship.  We didn’t live together, and she was always very set on us having a “schedule” of times that we would see each other.   I always felt I had to ask permission if I was to dare not fulfill my “obligation” to her schedule.   She would become extremely upset if for some reason we had to break from her schedule for any reason.   I had a friend who I had not seen in a very long time who was going to be in town.  I was hoping to see him during one of our “scheduled” together times.  She strongly urged that I see my friend during a time when I had placement of my daughter and that I should get a babysitter for my daughter so I could see my friend and not take away from her and my scheduled time together.  In her mind, I should give up time with my daughter before I was to give up time with her in order to see my friend – a definite red flag.  This conversation occurred in the  bedroom at her house with us both sitting on the bed.  She was absolutely insisting that I could not see my friend unless it was during a time that I arranged for a sitter during the time I had my daughter.  Frustrated, I stood up and put on my jacket and said “I don’t like where this relationship is going” and started to walk out of the bedroom.  She literally turned ON A DIME and told me that she would be happy to work out a time when I could see my friend and whatever I could make work was fine with her and she would accommodate.  I never did end up seeing my friend.  Looking back, the entire episode was a test.  She was testing how much control she had over me.  Once I showed her that there was a limit and that I was considering ending the relationship if this was how it was going to be, she immediately backed down.

Going back to our gas station attendant:   It’s possible that the gas station attendant has NPD and his coworkers hate him and his family can’t stand to be around him, but since I have no emotional connection to him and he knows it, he is unlikely to use his typical tactics to manipulate me.  Additionally, he has little to be gained through his manipulation of me.  From my chair, since we have no emotional connection, anything he does or says will be meaningless to me unless it’s physical in nature.

For me, the trick is to treat those poisonous arrows from the narcissists in my life like they were emanating from attendant at the gas station.

Of course at the end of the meal the obligatory fortune cookies were handed out with the check.

Here’s what mine said: 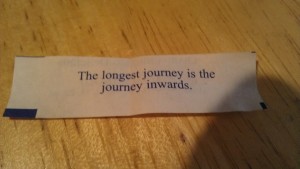 How very true!  Learning who I truly am and why I am that way has been by far the longest and most painful journey I have ever taken.   Peeling back the onion on 4+ decades of my existence has taken me to places I never thought I would go, but it’s definitely been well  worth it.

Now if they would just finish my kitchen floor!